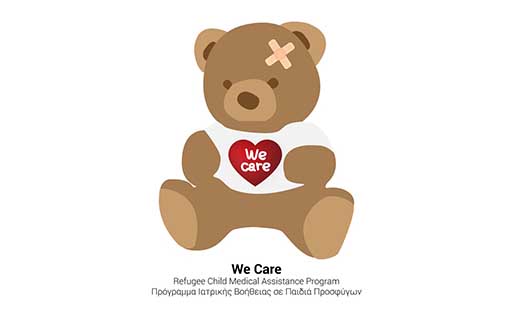 On September 23, 2015, “Marianna V. Vardinoyannis Foundation” announced the beginning of its new program “WE CARE – Refugee Child Medical Assistance”, which aim is to provide medical care, vaccines and psychological support to the children of the refugees in Greece.

“WE CARE- Refugee Child Medical Assistance Program” concerns infants, children and teenagers up to 16 years old. They will receive free medical assistance, prevention checking and vaccination. Each child will receive a temporary personal health record booklet where we will write down all the information that is necessary for their future medical history anywhere they go. The program has received the approval of the Greek Ministry of Health. In case of emergency, they will be treated at the “Agia Sophia Children’s Hospital”. At the same time the program will provide them with food and first aid supplies.

The program will be implemented by a mobile unit consisted of volunteer pediatricians and nurses of the “Agia Sophia Children’s Hospital” and members of the “Medical Association of Athens”, and will start in October 2015 in Athens. Afterwards it will include several areas of Greece where refugees are received.

The Program was announced by the Goodwill Ambassador of UNESCO and President of the “Marianna V. Vardinoyannis Foundation” Mrs. Marianna V. Vardinoyannis and by the President of the “Central Association of Municipalities of Greece” and Mayor of Amaroussion Mr. George Patoulis in a Press Conference held on Wednesday, September 23rd 2015, at the Oncology Children’s Hospital in Athens, Greece. The Greek Minister of Health, Professor Athanasios Dimopoulos, addressed the launching and the CEO of the “Agia Sophia Children’s Hospital”, Mr. Manolis Papassavas, spoke about the participation of volunteers from the hospital.

The Foundation wishes to contribute to the efforts of UNESCO for the protection, education and relief offered to the refugees, particularly the ones from Syria. “We Care” program is considered as a pilot project for the co-operation between NGOs and Municipalities that can be promoted all around Europe through UNESCO and the “International Coalition of Cities”.

The protection of children has always been the main priority of the “Marianna V. Vardinoyannis” Foundation since its establishment and the collective effort has always been its main belief. With the principles of UNESCO and the United Nations as a compass and social solidarity as the guide of its actions, “Marianna V. Vardinoyannis” Foundation stand by the children not only of Greece but of the entire world. Through this new program entitled «We Care – Refugee Child Medical Assistance», the Foundation aims to relieve the refugee children and their parents from the pain and hardships of being uprooted and help for their safe passage through Greece, and wish them that the smile on their face will soon reappear.