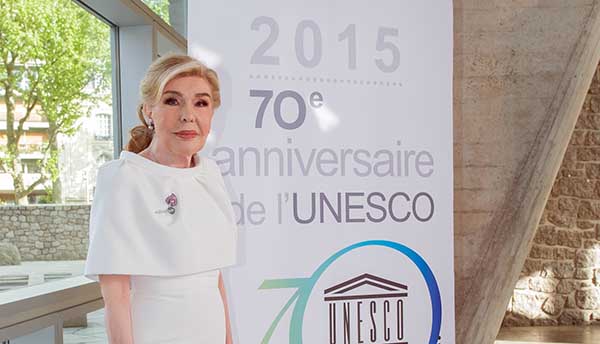 UNESCO’s achievements and actions around the world to build peace and sustainable development were honored at a special event celebrating the Organization’s 70th anniversary, held at the Organization’s Paris Headquarters on 28 April.

UN Secretary-General Ban Ki-moon, the Heads of all other UN agencies and Goodwill Ambassadors joined Director-General Irina Bokova for the occasion. The celebration marked the establishment of UNESCO as a UN Organization, and served to highlight the core values and concepts forged by UNESCO since 1945, that continue to underpin its action today.

In his address to a packed auditorium, Ban Ki-moon paid tribute to the Organization as a “powerful force for peace”, a “champion of freedom of expression” and “a staunch defender of education, culture and sciences”.

“On this anniversary, let us return to UNESCO’s founding constitution,” the Secretary-General said. “Let us heed its wisdom that ‘culture and education for justice, liberty and peace are indispensable to human dignity and the sacred duty of all nations.”

Responding to Mr Ban and welcoming “the whole United Nations family”, Irina Bokova said the world was still very much in need of the inspiration and courage that led to UNESCO’s creation and which had guided the Organization over the past seven decades.

“Today, as the world did in 1945, we face a vast array of challenges and threats,” said the Director-General. “We need the same audacity that gave birth to this house 70 years ago. We need to think big again. In the face of violence and violent extremism, we must raise high again the flag of solidarity and build a more lasting peace through education, through the dialogue of cultures, through mutual understanding on the basis of respect and equal dignity. In the face of climate change, we must unleash the full power of human ingenuity, human creativity.This is our ultimate inexhaustible renewable energy. And this is UNESCO’s mandate.”

On the occasion of the 70th Anniversary of UNESCO, Goodwill Ambassador, Mrs. Marianna V. Vardinoyannis, who was present at the event, stated: “UNESCO tries to empower peace in our world through education and culture and our wish is to focus on the needs of peoples and to protect our planet. It is our duty to build lives of dignity for all”.