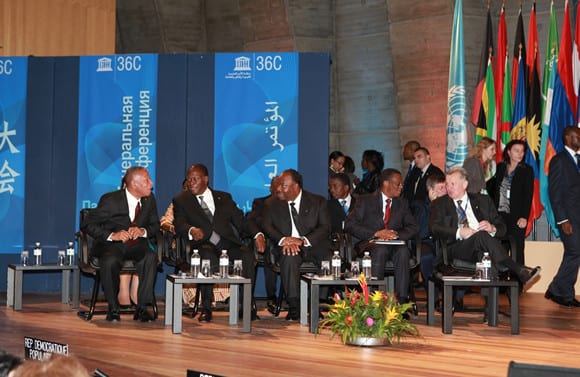 In the frame of the 36th General Assembly of UNESCO, that took place from the 27th of October until the 10th of November 2011 at the UNESCO’s Headquarters, UNESCO organised the Heads of States Forum, a platform for reflection and exchange of opinions in the highest rank of governments, intending to new, more inspired and creative prospects for the future of humanity.

The Heads of States, who responded to this new initiative by UNESCO, had the opportunity to investigate the pioneering ideas as well as the new challenges and ways for building the Culture of Peace and promoting the Sustainable Development in collaboration with UNESCO.

Greetings were addressed by the Minister-President of the Government of Flanders (Belgium), Mr Kris Peeters, the First Lady of Azerbaijan, Mehriban Aliyeva and the First Lady of the Dominican Republic, Margarita Cedeno de Fernandez.

It is worth noting that the Ministers and the Heads of Permanent Delegations from many UNESCO member states who participated in the Forum intervene in a brief but to the point way, while journalists from all over the world covered with extensive reportages the important proposals and the vital decisions taken by the participants during the Forum.

The Forum of the Heads of States opened with the speeches of the new President of the UNESCO General Assembly, Mrs Katalina Bogyay, the President of the Executive Board of UNESCO, Mrs Eleonora Mitrofanova and the Director-General of UNESCO, Mrs Irina Bokova, who during her speech pointed out that: ”Our world today, more than ever, needs powerful ideas, which mobilize the societies and bind us together. For the next day, therefore, we may like to remember the words of the famous humanist and French writer, Victor Hugo: One can resist an invading army but cannot resist an idea whose time has come.”