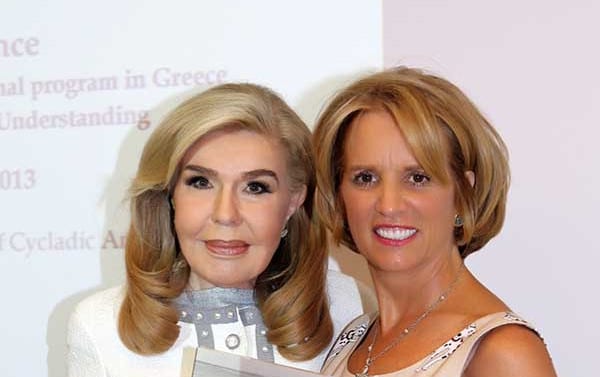 On the 23th of July, in the auditorium of the Museum for Cycladic Art in Athens, UNESCO Goodwill Ambassador Mrs. Marianna V. Vardinoyannis and Mrs. Kerry Kennedy, daughter of Robert Kennedy, of lasting remembrance, and Ethel Kennedy and author of Speak Truth to Power, gave a press conference and signed a memorandum of cooperation between their two foundations the Marianna V. Vardinoyannis Foundation and the RFK Robert F. Kennedy Center for Justice and Human Rights. As announced, the first step of this cooperative endeavor will be the implementation of the Speak Truth to Power program in Greece. This entails an educational program designed by the RFK Robert F. Kennedy Center for Justice and Human Rights and implemented to date in numerous countries of Europe, the Americas, Africa and Asia. The aim of the program is to inform and raise student awareness on human rights and the exercising of these rights in daily life.

The press conference opened with a speech made by Mrs. Vardinoyannis in which she pointed out among other things that Kerry Kennedy, inspired by her fathers vision and following his path, has dedicated herself to disseminating, in various different ways, his values. She shares her fathers firm conviction that the purpose of each individuals life is to contribute in some fashion to improving things overall. Mrs. Vardinoyannis emphasized that Kerry Kennedy and I believe that children are the future of humanity and investing in youth is the best thing we can do for people to live in peace and justice tomorrowFor the last 15 years, the Marianna V. Vardinoyannis Foundation has defended children in the fight against pedophilia, abuse and exploitation of children, trafficking, illiteracyThrough conferences, events, lectures publications and participation in international campaigns organized by agencies such as UNESCO, the Foundation has made a concerted effort to inform the public and raise public awareness regarding the dangers threatening the wellbeing of children. Respect for signed treaties such as the International Convention on Childrens Rights and the principles enshrined therein as well as the UN Millennium Goals has been repeatedly emphasizedThe cooperative endeavor with the RFK Robert F. Kennedy Center for Justice and Human Rights falls within just this framework. This cooperation began 11 years ago when we organized Speak Truth to Power a series of events including a theatrical performance, photography exhibition and the publication of Speak Truth to Power in Greek in cooperation with the Greek chapter of Amnesty International. This collaboration, today ascending to new levels through the educational program we intend to bring to Greece, is indeed a special honor for me Together with Kerry we can work to adjust the educational material prepared by the Robert F. Kennedy Center for Greek students so that they too may share this knowledge and become part of this vision. It is our desire to prepare a new generation of leaders and a new generation of responsible, sensitive and just individuals with respect for the value of life and the rights of every man, woman and child to a life of dignity, development and welfare

Thereafter, Mrs. Kerry Kennedy took the floor and expressed her happiness with the cooperation forged and made mention of the close ties of friendship linking her family with the Vardinoyannis family. She emphasized the fact that Marianna Vardinoyannis and her husband Vardis Vardinoyannis are founding members of the Robert F. Kennedy Leadership Council along with Desmond Tutu, Bill Clinton and other major figures and that they have contributed significantly to its work. It is a great honor to be here today and announce to you this joint program of the Marianna V. Vardinoyannis Foundation and the RFK Robert F. Kennedy Center for Justice and Human Rights. Im particularly happy to be working together with Mrs. Vardinoyannis as our close friendship goes back quite sometime and as she is known worldwide for her philanthropic activitiesBut beyond the figures that tell us a great deal about her work, your heart swells with gratefulness for Marianna when you get to know up close the children, mothers and fathers and when you realize just how dramatically their lives have been transformedYes, Marianna has transformed the lives of many people and especially of many childrenI remember when my father was once asked how he would liked to be remembered and he responded: As a person who helped stop the suffering of children I personally dont know anybody who has worked harder for children than Marianna Vardinoyannis and I am very proud of the fact that her name and that of my father are once again linked through this cooperation The Speak Truth to Power program is taught to a million students each year throughout the world. Its aim is to sensitize students on human rights and to educate them to stand up against not only pornography, abuse and exploitation but all forms of racism as well. The aim of this program is for students to understand that a hero isnt someone who intimidates but someone who can stand up to something. The program is for the most part made up of electronic and printed material based on the experience of courageous activists and human rights and justice defenders. The material is flexible and is adjusted according to the idiosyncrasies/particularities of the country where implemented. Indeed weve noted that the more flexible the material, the better. In certain instances the duration is 12 weeks with 12 hours of schoolwork followed by homework. However some schools have chosen to make the program more interactive enriching it with film festivals, theatrical works etc. and have reduced teaching hoursMost important is to provide students with the knowledge and tools that will strengthen their decisiveness and empower them in the defense of human dignity, establishing foundations for social justice, claiming and consolidation of human rights.

The press conference was coordinated by Mrs. Rodi Kratsa, Vice President of the European Parliament and active member of the Board of Directors of the Marianna V. Vardinoyannis Foundation.

Finally, worthy of note is that during her Athens stay, Mrs. Kerry Kennedy visited the Marianna V. Vardinoyannis-ELPIDA (HOPE) Child Oncology Unit to deliver her own message of hope to sick children and their families and to express her support and admiration for the work done by the ELPIDA (HOPE) Society. Mrs. Vardinoyannis thanked her for her interest and support, presented her with an honorary plaque from the Society and asked her to place a star with her name on the hospitals Wall of Stars, where eminent visitors to the hospital have placed stars with their names.

*Aim of the RFK Robert F. Kennedy Center for Justice & Human Rights is the support and rewarding of human rights defenders, lawyers, journalists, journalists and all those who through their research and work uncover injustice and inequality. Dialogue, the exchange of knowledge and experiences, the dissemination of developed methods of learning and new practices, the forging of alliances and organizations are just some of the ways in which the RFK Robert F. Kennedy Center for Justice and Human Rights helps and supports those active in the struggle for the consolidation of human rights and the establishment of social justice, invaluable factors contributing to the improvement of the quality of life and the fulfillment of Robert Kennedys vision for a more just and peaceful world.