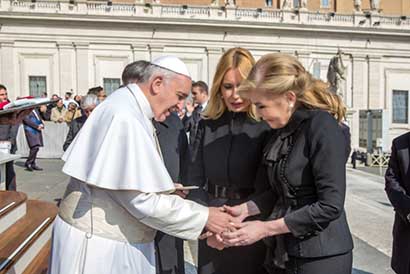 Mrs. Marianna V. Vardinoyannis, Goodwill Ambassador of UNESCO, met with His Holiness Pope Francis after the General Audience held at the St. Peter’s Square, on March 11, 2015.

In a very emotional atmosphere, His Holiness Pope Francis blessed the pilgrims who arrived in the Vatican from all around the world. The General Audience of March 11th was dedicated to the important role of the elderly in children’s lives and the attempt of the Church to encourage a creative dialogue between generations.

Pope Francis honored Mrs. Vardinoyannis by inviting her to attend the ceremony in the official area on his right side. Cardinals from Korea and other parts of the world were also present and placed on the left side of His Holiness. Parts of the Gospel were read in different languages, such as Italian, English, French, German, Polish, Arabic and Portuguese.

Having children at the core of his humanitarian work and knowing her long lasting work for them, Pope Francis congratulated Mrs. Vardinoyannis on her efforts to protect children in Greece and abroad, such as the 760 children that were saved from cancer thanks to the “ELPIDA Association of Friends of Children with cancer” which was founded 25 years ago by Mrs. Vardinoyannis. The Founder of ELPIDA Association, who also serves as Goodwill Ambassador of UNESCO since 1999, thanked him for the highest honor she had to be invited and to meet him on this symbolic day.

Among other issues, Mrs. Vardinoyannis informed Pope Francis about the progress of the “Affiliation Program” of “ELPIDA Association” which aims at the creation of a global network among the largest hospitals around the world so as no child suffering from cancer will ever need to travel to another country in order to be saved but to be cured near its home and family. Mrs. Vardinoyannis asked Pope Francis for the support of the Catholic Church through the participation of Catholic University Hospitals in this program.

Pope Francis assured Mrs. Vardinoyannis for his support, encouraged her to continue her work with the same strength and dedication and gave her his blessing.