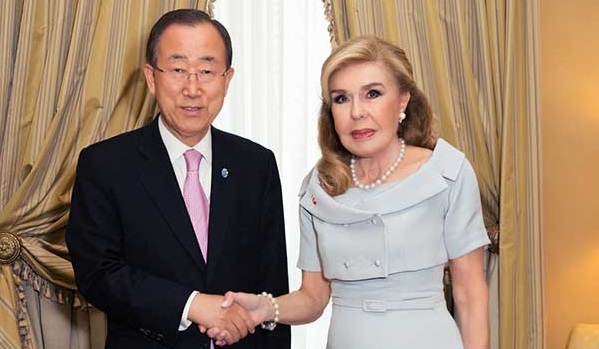 On the occasion of his visit to Athens on June 17th 2016, the Secretary-General of the United Nations Mr. Ban Ki- moon and his wife Mrs. Ban Soon-taek had a private meeting with Mrs. Marianna V. Vardinoyannis, Goodwill Ambassador of UNESCO.

During their meeting they discussed about the “We Care” program of the “Marianna V. Vardinoyannis Foundation” which provides medical assistance, vaccines, personal hygiene items and food to refugee children hosted in refugee camps in Athens, Lesvos and other parts of Greece.

They also discussed about future initiatives of the Foundation which are based on the priorities of the United Nations and UNESCO, including the International Meeting of Experts on Refugees which will be held in November 2016, in Athens, organized by the Foundation in collaboration with UNESCO and the “European Coalition of Cities against Racism”.

After the meeting, Mrs. Vardinoyannis stated: “It is a very important and symbolic visit of the United Nations’ Secretary General in our country. It sends a strong message of solidarity and humanism from Greece to the whole world.”

It is worth noting that, as a Goodwill Ambassador of UNESCO, Mrs. Vardinoyannis shares bonds of friendship and co-operation with Mr. and Mrs. Ban, as well as that in the framework of the official visit of the U.N. Secretary-General to Greece in November 2009, Mrs. Ban had visited the Guest House of the “ELPIDA Association of Friends of Children with cancer”, which is presided by Mrs. Vardinoyannis, to visit children with cancer and to express her support and solidarity.