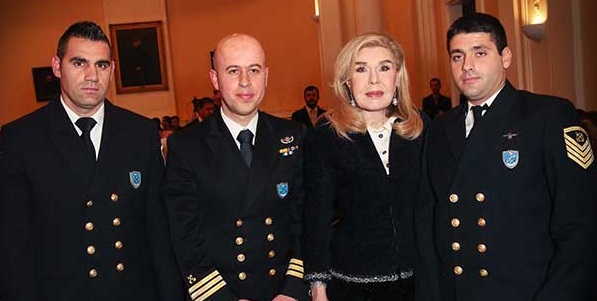 On January 21st 2016, the Hellenic Coast Guard Club honored Mrs. Marianna V. Vardinoyannis and presented the title of the Honorary Member to her, in a special ceremony at the building of the Armed Forces Officers Club.

The Hellenic Coast Guard Club honored Mrs. Marianna V. Vardinoyannis and presented the title of the Honorary Member of the Club to her, as well as to the heroic men of the Hellenic Coast Guard who risked their lives rescuing thousands of refugees in the Aegean sea: Commander Panteleimon Vatousis – Senior Vessel Commander of the Central Coast of Chios, the NCO Chief Petty Officer Odysseus Mathioudakis of the Port Authority of Leros and the Coast Guard Aristocles Sagres of the Port Authority of Kalymnos.

The President of the Club, Admiral Pelopidas Angelopoulos, talked about the multifaceted and long-term work of Mrs. Vardinoyannis and congratulated her for her contribution not only to the sick Greek children, but also for the initiative taken by the “Marianna V. Vardinoyannis Foundation” to help the children of the refugees, establishing the “We Care” program, through which it provides medical care and vaccinations.

Mrs. Vardinoyannis thanked for this honor, an honor that she described is “particularly touched as it comes from the wider area of ​​the Navy in which we connect, my husband and I, with longstanding strong ties since he was a young officer in the Navy,” and then congratulated the heroic men of the Coast saying: “I am here as a Greek, proud of the important services provided by the Coast Guard in our country. And on this occasion I would like to congratulate the Head of the Coast Guard, Vice Admiral Athanasios Athanasopoulos, and the entire Hellenic Coast Guard for their great work and outstanding services to our country. I stand among you at this moment mainly as a Greek mother and as a citizen of the world, feeling deeply touched by the heroic, superhuman efforts of the Coast Guard to rescue thousands of refugees who risked their lives into the sea longing for a new home and for the safety of their children. The images of mourning on the beaches of the Greek islands can be bore in our consciousness only with images of the Coast heroes that save women and children inside the half sunk boats. I feel very humble to be awarded tonight next to these heroes that I would like to shake their hands, to congratulate them and express a big and sincere thank you from the bottom of my heart”.