First meeting of the Friends of the Aswan Heart Centre 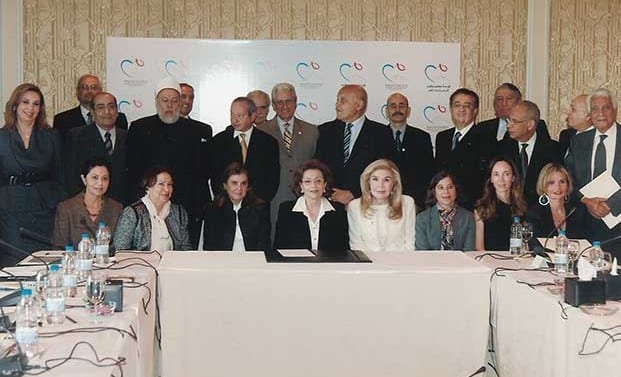 The great vision of the Magdi Yacoub Heart Foundation, the development of the Aswan Heart Centre into an outstanding medical institute, aiming at maintaining the health of the Egyptian population, and mainly of the most vulnerable social groups emphasising on children, is realised thanks to its many supporters.

The supporters of this vision, the Friends of the Aswan Heart Centre, are personalities of international prestige as well as businessmen, with the First Lady of Egypt, Mrs Suzanne Mubarak as a President and the leading cardiac surgeon, Sir Magdi Yacoub, as a Vice-President. Among those, there are also the UNESCO and Goodwill Ambassador, Mrs Marianna V. Vardinoyannis, who participated in the first meeting of the Friends of the Aswan Heart Centre, the businessman Naguib Sawiris, President of Orascom, the famous actor Omar Sharif, and others.

Mrs Suzanne Mubarak, Sir Magdi Yacoub and Mrs Marianna V. Vardinoyannis among the “Friends of the Aswan Heart Centre” and the members of Board of Trustees of the “Magdi Yacoub Heart Foundation”.

In the First Meeting of the Friends of the Aswan Heart Centre, that was held onΒ January 5th, 2010, their plan of action was extensively discussed with the first objective being the search for sponsors for the full and complete equipment and the model operation of the Centre Units, the education and specialisation of the nursing personnel, including doctors, scientists, nurses and technicians as well as the establishment and development of the scientific cardiology research centre which will focus in the characteristics of the local population.

As announced by the Ambassador, Dr Mohamed Shaker, President of the Board of Trustees of the Magdi Yacoub Heart Foundation, up to May 2010, the Aswan Heart Centre which, at the moment, functions as a separate unit in the University Hospital of Aswan, will be transferred to the new building which is intensively being constructed in a large area of New Aswan, by the banks of the Nile, granted by the Egyptian state for this purpose.

Mrs Suzanne Mubarak and Sir Magdi Yacoub referred to the importance of such a Centre, which will cover a large void, in a period of time where the cardiac episodes are rapidly increasing; they spoke with enthusiasm and gratitude for the current response of the people, either well-known or anonymous, from all over the world, who were eager to contribute to the completion of this great work that will benefit not only the Egyptian population but also the wider region. Some people, as they particularly said, offered money, allowing the Resource Management Committee of the Centre to spend them accordingly; some others undertook the educational expenses of one or more nurses, scientists, doctors and technicians; some others the expenses of one or more trainers, and some others the technological or equipment costs. For this reason, they concluded, we are now more optimistic than ever, that our vision is not far from its implementation, a fact which is not simply hopeful but a saviour for the Egyptian population.

Mrs Mubarak also stressed that there is no time for delays. On the one hand the technology is rapidly advancing, on the other hand peopleβs needs in the health sector are multiplying, and therefore we need all those who can help us in order to join our forces. When we all work together, we can make our dreams true, she said closing her speech.

In the discussion that followed between the members of the Friends and the Board of Trustees of the Magdi Yacoub Heart Foundation, Mrs Vardinoyannis praised the work of Mrs Mubarak and the great effort of Sir Yacoub expressing her support for this initiative that constitutes an excellent example of social offer as it places science and technology at the service of health and the vulnerable social groups in an exemplary way. Egypt, she characteristically said, once again becomes a pioneer, this time in the creation of health infrastructures, the provision of high medical services and medical research, on the one hand, of having Mrs Mubaraks work as a motive force and on the other hand Sir Magdi Yacoub as its soul who, with the know-how, his experience and sensitivity, has designed an exceptionally modern and complete medical centre provided to every social group of Egypt and specifically children.