Excellence Awards, Greeks as role models for the Next Generation 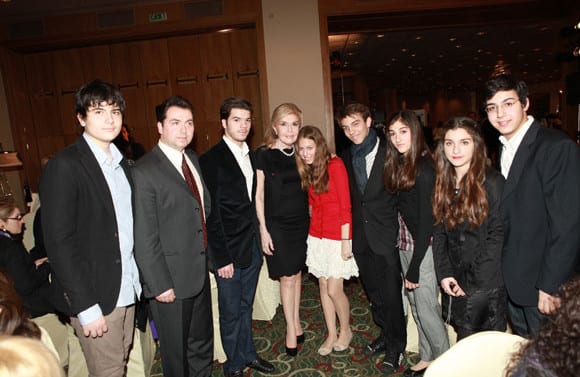 On 2 March 2011, the European Council for Youth Mobility in Research and Technology honoured 12 renowned Greeks for their significant contribution to the fields of social welfare, science, culture and sports, as chosen out of 60 personalities, through a vote in which thousands of award-winning young people took part.

The event with the title Excellence Awards, Greeks as role models for the Next Generation, that was organized in the framework of the Greek Presidency, was held at Hotel Caravel, with the participation of over 300 award-winning young people from all over Greece and the presence of numerous prominent figures from the world of art, science, culture and the media.

The aim of the event and of the honorary distinction for the 12 most renowned Greeks was, on the one hand to highlight that other Greece, a country that can set an example for the rest of the world and become a major leader in international developments, and on the other hand to promote Greeks pioneers from various sectors to the younger generation, so that they may function as their role models.

During the award ceremony, the President of the European Council for Youth Mobility in Research and Technology, Mr. Konstantinos Nakis, stated: …you are an internationally acclaimed figure, one of most important women of Greece and a bright example and role model for the youth of our country… We thank you for doing us the great honour of accepting this honorary distinction and for your participation in our vision of Greece as a country of progress, creativity, recognition, excellence….

After thanking him for the honour bestowed upon her by the European Council for Youth Mobility in Research and Technology, Mrs. Vardinoyannis gave a brief address at the event pointing out the following: …Today, the international community is facing great challenges and numerous difficulties. In a world with no borders, we see what mankind is led to when people are replaced by numbers, when dreams are often crushed, when human life loses its value on a daily basis amidst the flames of wars with no ideals. Through my work, I have witnessed human suffering, the misery of children, the horror of war and disease, and the gradual destruction of our planet. Nevertheless, hope remains alive in my heart, stemming from every collective effort aiming at a great cause. Whatever position I have strived from, I have always come to the same conclusion: That life has value when you fight for what you consider good and right! And that all great ideas that changed the world came from ordinary people who did not consider themselves to be the centre of the world but saw the world as the centre of their actions. Overcoming ones ego is the foundation of volunteerism, and of humanitarian and social work. When we manage to turn the I into we, then we can truly begin to hope.