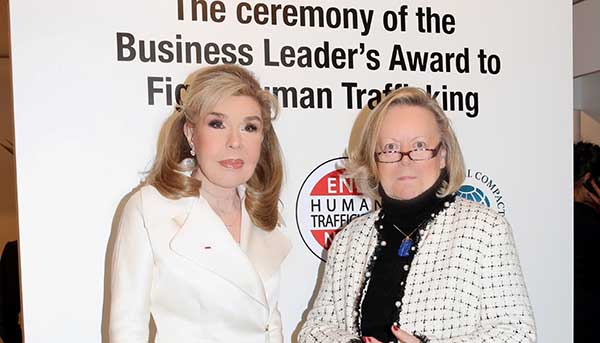 UNESCO Goodwill Ambassador and member of the Board of Directors of the organisation “End Human Trafficking Now“, Mrs. Marianna V. Vardinoyannis, made an appeal to the international business community and political leaders to put an end to human trafficking, in an event that took place in the frame of the World Economic Forum in Davos.

Human trafficking, modern–day slavery has millions of victims, mainly women and children and is the third largest criminal industry in the world after trafficking in guns and drugs. In order to put an end to trafficking, the global campaign “End Human Trafficking Now” (EHTN) was launched in Athens on the occasion of the ”Business Community Round Table Against Human Trafficking“, organised by Mrs. Marianna V. Vardinoyannis at Zappeio Megaron in January 2006. Renowned personalities from around the world participated, including HM Queen Silvia of Sweden, HRH Sheikha Sabeeka of Bahrain, the Secretary General of INTERPOL, Mr Ronald Noble, leading entrepreneurs from Greece and abroad, who compiled and signed the Athens Code of Ethics, a system of principles and commitments for tackling human trafficking.

Since Athens, significant steps forward have been made. Many governments have established special legislation against trafficking, helplines have been created for its victims and victim reception centres have been established in various countries.

In Davos, Mrs. Vardinoyannis was the keynote speaker at the ceremony for the “Business Leaders‘ Award” for fighting human trafficking and talked about the headway made and the prospects ahead. In her speech she underlined, among other: “Today, the business community has made a huge difference by taking a leading role in supporting innovation in the context of work policies, supply chain management and social corporate responsibility initiatives. By shouldering a part of the responsibility, transforming the dynamics of the profession, adopting a zero tolerance approach to human trafficking through business policies, the business community has shown that it can break the supply and demand chain of this extensive criminal practice and gain back the necessary confidence and trust of public opinion We are at a critical crossroads in our fight to end human trafficking. Human trafficking continues to increase in size and severity, crushing the spirit and destroying the lives of those it touches. With new realities emerging, as the nature of human trafficking continues to evolve, as the perpetrators of this crime become more devious, the problem appears to become more complex and even more difficult to tackle. We need all of you with us! As we learn more from each other we can make a difference. And with your leading role, engagement and support we will be able to turn back the tide…”

The “Business Leader Award” is awarded by UN.GIFT (Global Initiative to fight human trafficking), ”End Human Trafficking Now” and United Nations Global Compact, and is presented every two years to an entrepreneur who has contributed substantially to the fight against human trafficking. This year the prize was awarded to businessman Tristan Forster, founder and CEO of FSI Worldwide. The trophy, designed and created by Chopard, was handed to the winner by the President of Chopard, Mrs. Caroline Scheufele. The winner of the first prize in 2010, Mr. Robert Rigby–Hall  Executive –Vice President of NXP Semiconductors was present in the event.

The purpose of the Prize was not only to recognize the entrepreneurs who contribute to suppressing this crime, but also to encourage as many members as possible from the business community to engage in initiatives and to take measures that avert human trafficking and exploitation and reinforce respect of human rights for employees.

The event closed with a very important announcement, the merger of End Human Trafficking Now with Global Business Coalition against Human Trafficking, in which some of the largest companies worldwide participate, including Microsoft. This fact gives another dimension to the effort that started out in Athens and the fight for eradicating human trafficking and forced labour. The importance of mobilizing entrepreneurs was applauded a few months ago by US President, Barak Obama, at the speech he delivered at the Clinton Global Initiative Annual Meeting, where he stated: I want to salute the new commitments that are being made. That includes the new Global Business Coalition Against Trafficking -companies that are sending a message: Human trafficking is not a business model, it is a crime, and we are going to stop it. Were proud of them.

2. Mrs. Marianna V. Vardinoyannis and Mr. Yuri Fedotov, Executive Director of the United Nations Office on Drugs and Crime and his wife.

5. The winner of the Business Leader Prizan, Tristan Forster, founder and CEO of FSI Worldwide.