Cultural Heritage  Climate Change  The Role of the Educator Book Presentation: The land of two suns 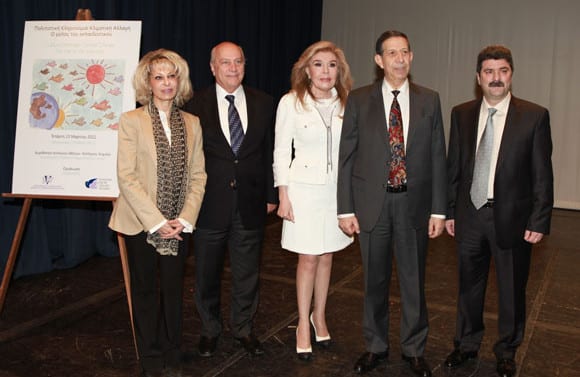 The need to conserve and protect cultural heritage, which is threatened by natural disasters and the impact of climate change, as well as the need to protect the environment and educate the next generation were the topic of the event organized on World Meteorological Day, 23rd March 2011, by Marianna V. Vardinoyannis Foundation at the Theatre of Athens College in Psychiko.

What will tomorrows world be like, when todays world is already at risk? On what values will future societies depend on? And what about the past, hiding within it all timeless values and the civilization of eternity, how will it be saved so that it may survive tomorrow? These were the 3 vital questions that Mrs. Vardinoyannis asked in her opening speech, pointing out that: The importance of cultural heritage and the ways with which we should conserve and protect it are issues of particular significance, especially for us Greeks, whose cultural heritage is our identity, our wealth and our contribution to the global culture…

Answers to these important questions were then given by the speakers at the event.

The first speaker was Mr. Mounir Bouchenaki, Doctor of Archaeology and Ancient History, Director-General of the International Centre for the Study of the Preservation and Restoration of Cultural Property (ICCROM) since 2005, with a long term of office at UNESCO as Assistant Director-General for Culture, as well as Director for World Heritage. Mr. Bouchenaki arrived from Rome especially to speak at the event; he was also a prominent figure at the International Conference of UNESCO on the protection of monuments from natural disasters, that was held in Ancient Olympia, a year after the destructive fires of 2007. The seminar was organized with the support of Mrs. Marianna V. Vardinoyannis. During his speech, Mr. Bouchenaki spoke at length about the studies, the relevant programmes being carried out and the measures being taken in recent years by ICCROM for the conservation of monuments, prior to, during and following sudden and extreme natural phenomena, such as earthquakes and tsunamis. He also stated: We do not own anything. We are only passers-by on this Earth. And that is why we have the responsibility to hand down a situation to our children that they can manage. That is why we need to be very careful concerning the programmes, management and protection of world cultural and natural heritage.

The next speaker was the Αcademician Professor Christos Zerefos, who highlighted the dangers threatening monuments located in coastal areas, due to the rising sea level, and underlined that this is not a natural phenomenon but one of the disastrous effects of climate change. He concluded by saying: The effect of man on cultural heritage may be worse than that of natural disasters, since extreme weather phenomena flooding, droughts- are increasing and becoming more intense due to the climate change. In order to protect the environment and our cultural heritage, it is also necessary to improve our education.

Mr. Loukas Zachos, Principal of Athens College Elementary School, took the floor next, stating that: …Firstly, teachers have to provide young children with knowledge, information, and education. It is their obvious duty to teach them also about our home, the world. To give them the tools to read, understand, and evaluate it. Then, they must teach children our history, and about the intellectual heritage of Greece and the world. To acquaint them with our monuments and make them love them, like a precious gift from their grandfathers and grandmothers. To turn them into good people with ideals and values. With such an education, they will have given them the necessary tools to always use the gift of knowledge for the benefit and protection of humanity. Apart from the teaching syllabus which effectively provides the material for all of the above, and together with their own enthusiasm and humanism, teachers can and ought to use every practical means and opportunity available to show students that change is possible. Such actions include a variety of projects on Environmental Education…

The final speaker was the archaeologist Mrs. Elena Korka, Doctor of the National and Kapodistrian University of Athens, Head of the Ephorate of Antiquaries and Private Archaeological Collections at the Ministry of Culture and Tourism, and writer of the book The land of two suns that was presented at the event. The realization that one of the most effective methods for the prevention and timely management of the risks related to natural disasters, Mrs. Korka said, involves information, awareness and education for the younger generation, was the motivation for creating the Land of Two Suns. The Land of Two Suns is a fairy tale that attempts, in a simple way, to inform and raise awareness among students at elementary school and in the first grades of secondary school, regarding the impact of phenomena linked to natural disasters and climate change on the natural and cultural environment, and to promote the need for joint action for their timely and effective management…

It is worth noting that the idea behind this book was born following the fires of 2007 in Ilia, which threatened a very important part of our cultural heritage, namely Ancient Olympia, which is why through an initiative of Mrs. Vardinoyannis, Motor Oil supported the first edition of the book as a sponsor, showing its sensitivity towards issues related to culture, education and the environment.

Also present at the event was Mr. Giorgos Anastasopoulos, member of and former President of the Board of the Hellenic American Educational Foundation (Athens College-Psychiko College), who addressed the audience and commended the initiative of Mrs. Vardinoyannis to bring us into contact with cultural heritage, climate change and education, while the Deputy Minister of Education, Lifelong Learning and Religious Affairs, Mrs. Fofi Gennimata, sent a written address. The event was moderated by the journalist, Mrs. Demi Chatzi.