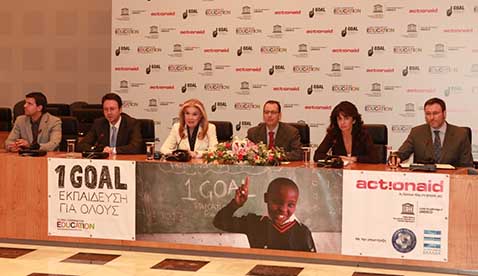 The international campaign ”1GOAL: Education for All” began in Greece in January 2010 and was coordinated by ActionAid Greece, under the auspices of UNESCO and the precious support of the Greek Football Federation (EPO) and Super League.

The campaign, which was realised in more than 200 countries, aimed at collecting millions of signatures that were finally delivered in the UN, with a view to be used as a driving force for the international commitment of the developed countries concerning the basic education supplied to all the children of the world up to 2015.

The campaign in Greece was coordinated by ActionAid Greece, under the auspices of UNESCO and the precious support of the Greek Football Federation (EPO) and Super League.

A Press Conference for the initiation of the 1GOAL campaign took place in Zappeio, where the President of ActionAid Greece, Mrs Alexandra Mitsotaki, the UNESCO Goodwill Ambassador, Mrs Marianna V. Vardinoyannis, the President of the Greek Football Federation (EPO), Mr Sophocles Pilavios and The General Manager of the Greek Super League Board, Mr Patrick Komninos addressed the public.

The Press Conference was coordinated by the General Director of ActionAid Greece, Gerasimos Kouvaras.

Mrs Mitsotaki referred to the importance of education and campaigns, saying: in order for all children to be able to go to school, something more is needed: the wider society to be aware of the problem. It is under this frame that the 1GOAL campaign is organised: the campaign for the collection of signatures. Then, she added: Today, it is estimated that 75 million children worldwide do not go to school. In 2010, when our planet produces so much wealth, encounters such a progress in knowledge, science and technology, when the human race has accomplished so many things, this is perhaps the greatest injustice, the worst inequality; because without education a child grows up without a future, without prospect, without hope. For this reason, we call everyone to give a voice to those who are never heard, to write their names for those that cannot.

Mrs Vardinoyannis referred to the importance of the participation of all of us in such campaigns, pointing out that the signature of each one of us acquires an enormous power and becomes a lever of pressure to all those who decide for the future of our world and she announced that the height of this effort will take place on the 17th of March, with a festive event to be held in the Megaron, The Athens Concert Hall, where the Greek State, the athletic, artistic, academic and journalistic worlds will put their own signature for the 1GOAL campaign in order to score in favour of the education and the future of children! It will be one of the most important GOALs! that we will score together by writing our name in favour of those who are not able to write it by themselves!

As Mr Pilavios stated the time of action has come so that, apart from the success of the tournament, the leading worldwide football event in Africa, leaves behind a long-term heritage of education that will also last after the final whistle of the last match. The Greek Football Federation supports this enormous mobilisation through a series of events which will be organised in the Greek Cup Finals, the All Star game and the friendly matches of our National Team in the beginnings of March. I am calling the millions of Greek sports fans not only to watch the World Cup games from the tiers or their television screens, but also to actively support the 1GOAL campaign.

At the same time, Super League has decided to support the 1Goal: Education for All initiative, which aims at helping the children of the developing countries to acquire the right to education. During the 20th and 21st rounds, the sports fans in every stadium, but also through their televisions, will be able to be informed and offer their support, along with people from all over the world. Making use of the dynamics of the Super League Championship of OPAP, we are supporting the efforts of ActionAid as every week, millions of sports fans watch the matches either in the stadium or through the television,, as Mr Komninos stated.